We already know the design and specifications of the Samsung Galaxy S22 Ultra , called to become the next flagship mobile of the South Korean manufacturer. It is surprising for its design different from the rest of the S22 series, and for its commitment to integrating a touch pen into the body of the smartphone itself.

To begin with, the name of Galaxy S22 Ultra has been confirmed, like previous versions, as some rumors suggested that the Galaxy S22 Note would be chosen. By incorporating an S Pen stylus , and given that the Note range aims to disappear compared to the Z Fold folding, at first the leaks were betting on the name change.

The Samsung Galaxy S22 Ultra will have a different camera design than the rest of the S22 range, with five holes that protrude directly from the rear as “drops of water”. Only four of them would be cameras: the main one of 108 MP, ultra wide angle of 50 MP and two telephoto lenses of 10 MP with optical zoom of x3 and x10.

This is the design of the Samsung Galaxy S22 Ultra (the mobile in dark pink) according to a leaked official poster: 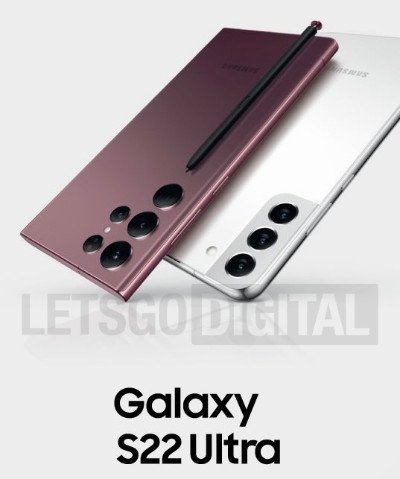 A 6.8-inch screen is expected, although its features are not known, nor the processor used. It is likely that in some markets it will come with the recent Snapdragon 8 Gen 1, and in other countries Samsung uses a proprietary Exynos chip.

The white mobile on the poster would be the Galaxy S22 +, and it demonstrates the two different design lines that Samsung will use in 2022 within its flagship range. The S22 and S22 + will keep the cameras on an elevation on the side, opting for rounded shapes and a glossy finish on metal and glass, as this year the plastic will be left aside.

Instead, the S22 Ultra has another design for the cameras, straighter shapes reminiscent of the Note range and a matte finish rear . It seems that dark pink will be the star color in 2022, although there will be no shortage of models in black, white and perhaps more colors depending on each country.

Although in the image it is not appreciated, the Galaxy S22 Ultra would have a slot to store the S Pen pencil , without the need to carry it in an external sleeve.

Of course, the Samsung Galaxy S22 Ultra looks attractive , but let’s not forget that it will have rivals in the premium range of the likes of Xiaomi 12, Oppo X60 or OnePlus 10. It is expected to go on sale at the end of 2022, and that it will be presented in full in the middle of that same month.