Can you imagine a fingerprint reader on the entire screen ? That is precisely what Xiaomi has patented for its next smartphones, which we could see in the coming years, setting a precedent with a unique technology that until now is a utopia.

Innovation in fingerprint readers is complicated, but this Xiaomi patent shows that this type of biometric security can be further improved . These types of readers have already been very common on Android mobiles for quite a few years.

That is why it is not uncommon to see it in low, medium and high-end terminals, although we see them implemented in different ways, in the form of a visible reader on the back or on one of the side buttons, more advanced are the on-screen fingerprint readers. , but they have their drawbacks. We also see fingerprint readers on computers, such as the new Lenovo ones.

The main disadvantage is that you have to press a very specific place on the screen to unlock the phone , if it is a little higher or lower the mobile will not unlock and that can sometimes be very annoying because you have to put your finger in the exact place.

And this is precisely what Xiaomi comes to solve with its patent, it would allow the user to use any corner of the screen to use the fingerprint sensor and unlock the device to use it, which eliminates that need for precision when pressing the sensor .

How the fingerprint reader works on the entire screen

It is difficult to explain the operation of this fingerprint reader present in the entire panel of the smartphone. The patent reveals that the reader would be able to recognize our fingerprint through infrared light once the user places his finger on the screen.

That matrix of infrared lights would be located between the screen and the capacitive touch panel of the panel and this is precisely the section that would be in charge of identifying our fingerprint on the entire screen without having to put our finger in a specific place. 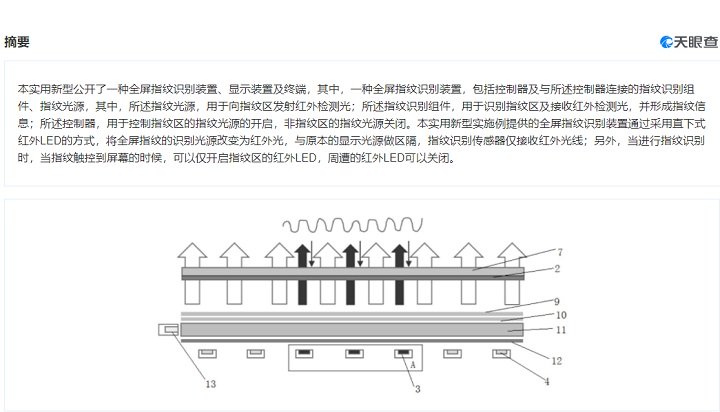 When we put our finger on the screen, that matrix would detect the keystroke in the place where it was made and would emit light according to the shape and position of our fingertips, thus conforming what has been the shape of our fingerprint.

Then, the light emitted towards the tips of our finger is reflected towards the receptors of that infrared light. The speed reached by the emission of this light is mainly used to compare the profile of the fingerprint detected and the one previously saved , so that if they match, it means that it is the same user and, therefore, the phone is unlocked.

It is an innovative technology that will offer a great improvement to the on-screen fingerprint readers offered by a large number of Android phones, the iPhone being one of the few devices that have not yet opted for this type of biometric security in favor of Face ID.

Taking into account that it is still a patent, there is still a lot of work to be done and surely mobile phones with this type of fingerprint reader on the entire screen will not be part of Xiaomi’s news for 2022, but for a few more years, so We will have to be attentive to events.